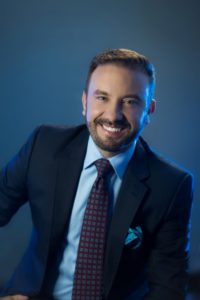 A political operative since early adulthood, Robin Biro was recruited to serve as Regional Director for Barack Obama’s 2008 campaign for President, after leading a successful grassroots initiative to ban smoking in public places in South Carolina, which was later used as a model for sister “Marlboro Country” states. Following the successful and energetic Obama campaign the only thing that could best the adrenaline rush he experienced was jumping out of planes in the U.S. Army, so he declined a staff job with the incoming administration and instead at 33 years old enlisted in the U.S. Army as the then oldest Option 40 Ranger candidate and went on to be selected for service in the 75h Ranger Regiment, serving combat rotations in Afghanistan with the Joint Special Operations Task Force (America’s Top-Secret Army). Robin is distinguished as the first Ranger serving in Ranger Regiment to come out as openly gay. Mr. Biro completed his tour of active duty in 2013, at which time he enlisted into the U.S. Army Reserves and went on to become 2014 Noncommissioned Officer of the Year for his brigade. He spent the remainder of his time in the reserves sponsoring subsequent contestants and training troops until his retirement. Mr. Biro was recruited to be a guest political commentator on television news networks in 2016. He has made thousands of appearances on live national TV, appearing most regularly on conservative media, representing the democratic counterpoint. Robin serves on the DNC’s Victory Leader’s Council, on the advisory committees for both Alliance Media Strategies and Discourse USA PAC. Of all of the challenges Robin has faced in life, the biggest by far has been his crash-course lesson in becoming a single parent after having been awarded guardianship of his late father’s school aged-children upon his passing in 2019. Robin currently resides in Atlanta, Georgia, with his two children, where he strives to teach them that it is possible to make the world a better place through hard work and determination.